In the music and the laughter,
In the vanishing of care,
And of all before and after

There is an anarchic joy in fan culture. In context of honoring favorite stories, be they any type of media, they are turned upside down, smashed together, made manifest in costume and art and become something gloriously devotional in the process. There are always debates on canon, going too far, what’s acceptable behavior and what is not. (If you’d like an example of the latter, mention “furries” or “fanfic” and see what distaste appears–however, that’s about as much of the negative as will ever be present here.) There are endless, agonizing struggles over factions, what’s appropriate or correct to present, show, or write and there’s plenty to read on that, much of it on Tumblr.

In other contexts, this might be called “lowbrow art” with its own particular style and galleries, “outsider art”/ “art brut” as created by self-taught artists or even “mash-ups” which take established images or stories and transform them into something else worthy of appreciation by another audience. These forms of art are powerful in their own right, but fan culture, even in an era where the nerds have supposedly won the culture wars is looked on with a raised eyebrow at best, and a shudder at worst.

Even participation in fan culture–and I’ve caught myself doing this–can include a “but I don’t do that”. (“That” in various forms can include fanfic, cosplay, media fandom, inappropriate writings or art, smutty fanfic, fursuits, polyamory, monogamy and anything deemed gauche or inappropriate by the person or group in question. This is not only limited to the fan community)

I find this limiting. Groups define themselves too often by what they are not instead of what they are; this can include such examples of certain times certain GLBT events were “embarrassed” by the leather community and the drag community and the early women’s movement’s attempt to distance themselves from lesbian and transgender women’s communities. While fan culture is not the same as these struggles in scope or sociocultural and legal importance as these, there is too often a “what we are not.”

Here, you’ll find celebration. You’ll find fun. You’ll find all the ecstatic joy that playing in other worlds brings in fashion, art, handcrafted loveliness, the written word,fanfic, fanvids, food and more. You’ll also hear about Tiny Cersei, my own project and anything else that I deem of interest because it’s my space. There’s going to be a lot about “A Song of Ice and Fire” and “Game of Thrones” because that is a place near and dear to me.

This is a positive, happy place.

The piece above is written in praise of Dionysos from Euripides’ The Bacchae and describes where the divinity and power of the god is found–and it works just as well for a human perspective. In the joy and “vanishing of care” in fan culture lies its power and intoxicating delight–and as a beginning, it is a fine one. Go forth and let them hear you roar, darlings.

Note: This is as academic as I want to sound here, so we can all loosen up a bit, adjust our belts and corsets and let our fancy braids get just a bit mussed. Ahh. 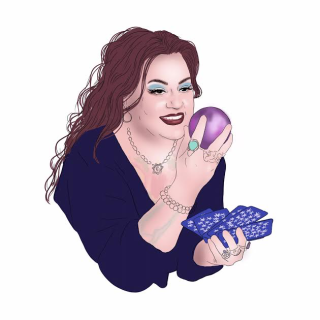 Book a reading at jessiemacphersontarot@gmail.com!